I am a big fan of DJ mixes so I wanted to mention some of the best mixes of 2010.

When I first heard “Speaker Bump vol.1” by Indaskyes, I was blown away and scoured the internet to find out who this DJ was and why I hadn’t heard of him.  His name made me wonder if he was some big name going by this name as an alias (“in disguise”).  It turns out this mix was Jared Lindo’s second gig EVER recorded in a small club in San Jose, CA!  This mix is amazing and still gets me moving even after a solid 9 months of bumping.  Download “Speaker Bump vol.1” here.  Follow Indaskyes on Facebook.

David Starfire has been a favorite of mine since I saw him at Love Parade in San Francisco a couple of years ago.  He is an amazingly talented producer and DJ whose beats are heavy on the bass mixed with a huge variety of ethnic sounds, from Middle Eastern to gypsy funk to hip hop.  This mix takes you along on a psychedelic journey of massive proportion.  Download the “Psychonaut Spinner Mix” here (right click… save as). Thanks to Reality Sandwich for hosting this mix.  Follow David Starfire on Facebook.  You can also watch David’s site for free songs and mixes at http://davidstarfire.com

Cory O is one to watch in 2011.  His Bandcamp and Soundcloud are full of remixes and original music up for grabs.  He has been playing at all of the major clubs in Portland for the last couple years and is amped up to take on the world.  His mixtape “Fuckin N Tha Streets” is just the right combination of glitched up hip hop beats with heavy bass.  It’s not the same old run of the mill stuff many people are putting out these days.  He has a unique new sound that works perfectly with the glitch hop music we all love.  Grab the mix here.

Kitty-D has been playing music in California for years.  He is not on any label and doesn’t have a huge catalog of releases, but that makes what you can get your hands on even more valuable.  He has collaborated with Mimosa around the country at festivals as Halo and with Ooah as Of Porcelain.  This mix from a full moon party in Humboldt 2008 is a must have!  Get it here (right click-save as).

Konekta is someone I started to see around Glitch Hop Forum and I was surprised when I found all kinds of great songs on his Soundcloud.  When he released his “Audio Splash Promo Mix” I made sure to check it out and was glad that I did.  This mix is bangin’!  This dude has serious DJ skills and his remixes are spot on.  When I shot him an email to find out more about him, I was happy to find out that he had just moved to Santa Rosa, California- just a few miles from me!  He is moving in the scene, working hard on his music- I have no doubt 2011 h0lds huge promise for him.  Grab the “Audio Splash Promo Mix” here and make sure to follow him on Soundcloud and Facebook. 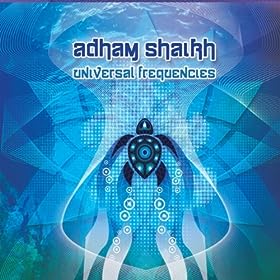 Adham Shaikh is a world beat electronic music producer from BC, Canada.  He has been making music and DJing for 25 years, releasing 12 albums and countless singles and guest appearances in that time.  He has produced and engineered albums, and scored original soundtracks for numerous film and television productions.  Adham has been nominated for awards for his film scores as well as his albums. This newest effort will surely be nominated for a Juno, as it is his best album to date.

Universal Frequencies has a more modern and funky feel to it than his previous release Collectivity.  There are sounds of swing, gypsy, and balkan beats.  The grooves had me and everyone else in the room dancing as soon as the first notes of each song started playing.  It doesn’t take long for this music to get inside your head and body.  The first song is appropriately titled “Crossroads- Part 1” and sounds like the Adham Shaikh songs from Collectivity.  The second and third songs are two different versions of “Water Prayer”, each with a nice groove that gets you warming up to the fact that you will be dancing soon.  The fourth song on the album is called “Carpet Breaker” and the fifth is “Rug Ripper” and yes, by the fifth song, you are ripping up the carpet… this is a funky dance album!  The unique world music sounds combined with the high energy beats make for an amazing musical experience.  Adham Shaikh is a true musical master who, with much thought and intention, takes you on an incredible journey from the first song to the last.